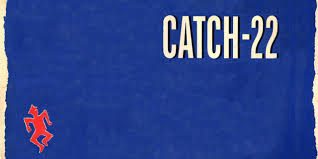 This is an interruption from regular programming. I feel a powerful need to show my affection and respect for one of my favorite books ever- Catch 22. So, bear with me thru a coarse course of unadjusted and broken academia infused by drunken poetics. 😋

In the book there’s no linear plot, there is only a timeline. It’s set in World-War 2 and not built against its weakening and tapering downward the end, but when Americans occupied Italy, and the war roared still. A bunch of crazy soldiers who dissociate into a multi-character narrative are bound in tight continuity, as they struggle to keep themselves in what seems like a losing game, nit for their country but they themselves. The protagonist can be Yossarian. A funky-women crazed-friendly-disco minded- and tired bombardier who lives his life under the expansive shadow of innumerable eccentric characters, and every connection he sparks with any is just a pleasure to read.

Catch-22 works so well under so many moods and it captured so many feelings. It’s always funny but with undertones of politics, and death, and poignancies. Multiple scenes do an amazing job of capturing something, which wavers like a cloudily fluffed beard that the sky wears as the sun wiggles itself down in burnished vigor. I’ve had so many happy times with that book, it was one great month after another, and it was one waste after a splash of bigger realizations.

There are two scenes that stand out to me, and I hope to express it in a way that is able to be sensed by all. And I can only try..

A few words later the father says “Soon, you’re going to die” He makes Yossarian promise to tell the man up above, about how unforgiving the people down below are at his tyrannical will, he makes him promise once and twice. And the mother asks him to dress warm, and she seems to know something about it.

To me this showed a side of death, that you get to experience in another body, in another mind, and it doesn’t belong to you, and you don’t even want it in the first place, but you see it- there is a place for you, when you’re not anywhere, and that place is only the final moment, where you have to remember to be comfortable, because the drinks all day, and the talks that extinguish at the grope of a tight handle, will only resonate for a second, and that too in a second far away.

Something about this just whispers and grabs me in direct, honest, capable community. I don’t know how else to be descriptive about something quite so crucial. A subjectivity intersects us at various readings of our often scripted lives, or the shadowy escape of books, movies, and songs, which are indulgent in serotonin producing embraces. Nothing quite buried me to sleep on nights homeless in the array of scattered thoughts, as the carefully cut clarity of this book.

There it is. Off I went.